Check Out My Wife's Rack 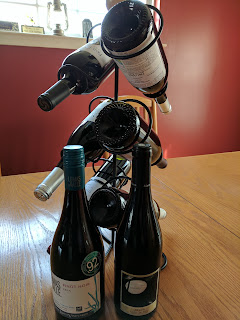 Mrs. JazzFoodWineDude's wine rack sits on our dining room table. As long as I keep it full, life is good.

My wife and I met one evening at one of her local hangouts after connecting on Match.com. For those of you that are single, and are looking to upgrade your online profile, try adding "I sell wine for a living" to your bio. It's like shooting fish in a barrel after that. I actually had never tried online dating before, and she was the 2nd person I talked to. I like to remind her that when I signed up, they had a 3 month special for $50. I would have paid $100.

We met at the bar, and she was drinking a glass of their house Peeno Noor. I ordered a glass of the same, and she still reminds me of the face I made when I took a sip. It could have been a dealbreaker, but I had to stick to my guns on this one, lest I compromise my integrity. No relationship should be based on a lie. I figured I should get the whole wine snob thing out in the open from the start.

I don't order wine in restaurants. Ever. Neither should you, unless you know what you're doing. There are a couple of nicer restaurants that have great wine lists, but other than special occasions, it's not something that we can swing on a weekly basis. In case you haven't heard of them, they got this great thing now called B.Y.O.B. I had a sommelier come to our table one time, and explain to me that the bottle of Dogliani I ordered, wasn't sweet. I replied "It better not be." Was he even old enough to drink wine? I bring my own wine, as well as my own corkscrew. I don't care what sort of glass they give me most of the time, as long as it's clean. I'm a firm believer in the importance of quality stemware, but I also believe that I break more wineglasses than the average wine drinker, and we usually stock up at Christmas Tree Shop.

I work a lot of crazy hours at the store, and I worry about her when I'm not home. I made her a promise when we started dating that her wine glass would always be half full. (If you want a "full" glass of wine, go to TGI Fridays. They go all the way up to the edge of the rim. A disgrace, if you ask me.) I have my own wine rack, where I usually keep the more "special" bottles, but part of my job as the wine guy, and best husband ever (Aren't they the same thing?) is to make sure that wifey has some good fermented grapejuice that she can enjoy whenever she likes. She has her own wine rack on our dining room table, and it holds about a week's worth or more. All of these wines are between $10-$15, and as you might expect, are from small wineries, and are sustainably produced, organic or biodynamic. Let's take a look at this week's lineup. 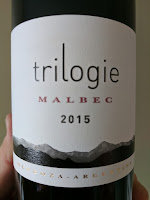 This is more or less, Hervé Joyaux Fabre's 2nd label, which is from vineyards he manages, rather than from the one's on his own estate. He's originally from Bordeaux, so look for a more reserved approach, as opposed to the all too typical hit you over the head with a bunch of fruit on the front end and then leave me hanging that so many of the larger producers like to give you. His own label wines are also terrific, and are all less than $15, aside from his Gran Reserva line, which is about $20. Trilogie is a steal for $10/bottle! 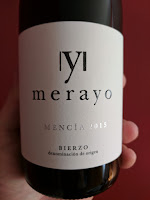 This was a recent find from one of my favorite importers. It was a busy week, and when the wines came in, I thought there had been a mistake on the invoice. I've sold Mencía for twice the price of this one that weren't this good. It's such a cool varietal. Years ago, it was believed that Mencía may have been Cabernet Franc, or somehow related to it, growing in Spain. DNA tests proved it wasn't, but stylistically, they're so similar, that it's hard not to be a fan of both. Medium bodied, violet floral notes on the nose, very feminine and pretty wine. Can't beat it for $10/bottle! 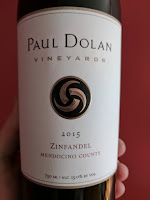 One of my sales reps brougt this one along this last week. I don't usually get excited about domestically produced wine, but I do when it's done right. Paul Dolan wines are made using only organic grapes and native yeasts. I'm unclear about their official certification, but if you check out the logo on the label, it's supposed to be 3 bull horns, so it's pretty clear to me that they're following at least some of the practices of biodynamics.

It's not over the top jammy like some other "entry level" Zins from California. This one clocks in at 15% ABV. This wasn't designed to be a crowd pleaser, but for those of you that don't need training wheels anymore, this Zinfandel is the real deal. It's big, powerful, well structured, but not overly astringent. There's that unmistakably Zin fruit on the mid-palate, along with almost minty overtones on the nose, but there's an earthiness to it as well. Less than $15/bottle! 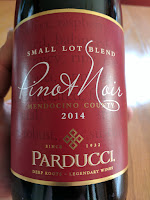 I usually don't have very nice things to say about California Pinot Noir. This bottle is terrific! Lively raspberry and strawberry fruit, with just a hint of cedar holding it together. It's shocking to see a Mendocino Pinot Noir in a glass, and actually be able to see through it. That's because it's actually Pinot Noir, not that hot mess of over extracted, over the top, probably 25% Syrah and Petite Syrah, with a bit of Mega Purple just to make sure the marketing department's campaign goes off without a hitch. If that's what you like, you'll hate this Pinot Noir. Me? Most of these chemical coctails that larger companies are passing off as wine make my teeth hurt. Real Pinot Noir should be simple, uncomplicated, light, and do a little tap dance on your tongue. $12/bottle! Are you kidding me?

Parducci is 100% sustainably produced, by the way. So, put down that mass produced national brand that you're totally sick of anyway and give this one a shot. 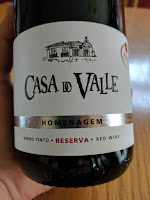 From Minho, Portugal, this is a really easy drinking blend of Touriga Franca, Touriga Nacional, Merlot, and Sousão. Not familiar with these varietals? That's OK. Let me break it down for you. Think of it like a Bordeaux blend, if you will. Playing the part of Cabernet Sauvignon is Touriga Nacional. In the role of Cabernet Franc, Touriga Franca. Merlot needs no understudy, apparently in this blend. (Such a diva.) Sousão makes a cameo appearance playing the part of Petite Verdot. All of these are typically used in the production of Port wine.

This bottle will be spending some time over at our house this summer, as it's going to rock with all the stuff I'm going to be grilling. Less than $15/bottle! 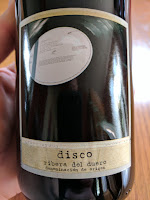 We carried this one about 2 years ago. I loved it, and sold a case of it in just a couple of days. Then it was gone. It wasn't until it got picked up by a new company that we brought it back in. We all wondered what had happened to it. The confusion may have stemmed from the fact that whenever we discontinue an item in the store, it shows up in the computer as "disco", which is an unfortunate name for this wine. Cool label for all of you hipster vinyl collectors. It's back, and since this is one of the comanies I work with rather closely, it won't be "disco" anytime soon.
100% Tempranillo from Ribera del Duero. I prefer this style of Tempranillo over one's from Rioja. THey just have a bit more substance, are a bit less oxidized, and are a bit more in the pocket with ripeness of the fruit. Pair with red meat, please! $12/bottle, means it's cheap enough that you can enjoy a bottle, and also not feel guilty about using about half of one to marinate whatever you're grilling. 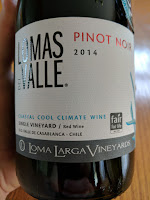 Pinot Noir from Chile can be such a great deal. This is one of them, for sure. I just brought this one in from a company that I didn't do much business with, but they got a new sales rep, so I decided to give them another shot.

Organically produced, and the sticker on the neck of the bottle is from James Suckling, who gave it 92 points. We actually have a joke in the store about him. He's a pleaser of a wine critic, and people might take him more seriously if he ever gave a bad score. We usually deduct 3-4 points when it's one of his reviews. I couldn't care less about all these guys and their point system, and I largely ignore the whole thing. Some people shop by numbers and scores, but I'm not one of them. How about this number. Less than $15/bottle!

Lively fruit, silky, everything Pinot Noir should be from Casablanca Valley, Chile, minus the bell pepper, which is all too typical of the larger producers that pick the grapes too early so thay can just crank it out. I wish that I had ordered a glass of this Peeno Noor when I met Mrs. JazzFoodWineDude. Maybe she wouldn't think I'm such a snob.

Tell me about what's in your wine rack. Like most people, $10-$15 is my sweet spot, and I'm always looking for something new.