I'm Only Dating These Wines. I'm Not Marrying Them.

Ordering wine for a retail store is a bit more involved than just picking out wines that you like. You need to think about any number of different things. I meet plenty of wines that sadly, will never make it onto the shelves. I love my job. I get to deal with most of the "smaller" distributors and importers where I work, and there are so many great wines to choose from, that it's easy to get carried away. Almost every day, I get to try all kinds of different wines and spirits, from any number of small producers. I sometimes joke about how it's such a tough job drinking wine at work, but it really is. Saying "no" is the toughest part. Unfortunately, I have to say "no" quite a bit. After all, I'm spending the owner's money when I buy this stuff. He's going to want it back with a profit at some point in the near future. That's how it works.

Even though the store I work for is big, there is still a finite amount of shelf space. I spend almost as much time tasting and evaluating new wine, as I do checking on wines that we already have on the shelf. Sometimes, it simply doesn't matter how much I love a wine, or how excited I was about it when we first met. Sometimes, the magic is gone, and it's time to move on. As much as I like to believe that I can sell anything, sometimes, certain wines just don't fly off the shelves. Priorities shift. The seasons change, and quite frankly, sometimes I just get bored with the same thing. Time to break up. Sorry, wine. It's not you. It's me.

Right now, I'm very excited about my Sicilian section of the store. Why? Maybe it's because up until about a month ago, I didn't have one worth mentioning. Now, it's almost all I talk about. I need to keep in the back of my head, that I'm usually good for about 2-3 months before I've moved on to something else that I find interesting, so I haven't made a huge committment, but let's have fun with it while it lasts.

There is something wonderful about wines from the Mediterranean area. Generally speaking, the reds seem to have brighter, meatier fruit, and take on a certain brinyness that you don't really find in other areas. It's almost as if someone threw some Calmatta olives in with the grapes while they were fermenting. White wines can come across a little nutty on the finish, with almonds or other tree nuts mixed in with the minerals on the finish. This makes them more than ideal for food pairings, especially if you stick to the cuisine from the same neighborhood as the wines.

I've found a few that are worth mentioning for sure, and regret that there are still a few more that I'd love to have, but alas... It simply wasn't meant to be. 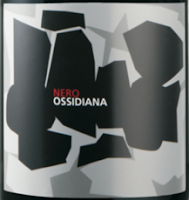 This wine comes from the Lipari Islands, which is off the northern coast of Sicily, where the climate and volcanic soil work together to make for some rather interesting Terroir. For the record, my favorite Italian wines are made near volcanoes.

This selection is a blend of 60% Corinto, 20% Nero D'Avola and the remaining 20% is Alicante. Corinto is actually a seedless variety, which may account for it's lack of any sort of "green" tannins. This wine is juicy, with flavors of cherry, ripe plum and a hint of chewy black tar holding it all together. I brought this bottle home a few days ago, and have been looking forward to pairing up with my homemade chicken Marsala. It's on the shelf for about $30. Organically produced. Definitely in my top 5 at the moment.

From Calabria, the "toe" of Italy, this wine is a blend of Nerello Mascalese and Nero D'Avola. Rustic and spicy, with almost tart red fruit, and soft, earthy tannins. This bottle practically begs to be paired with red meat. I find it ironic that one of my regular customers that's currently hooked on this one is a vegan. (I don't hold that against him.) This bottle is a bit of a treat at about $45, but well worth it. Organically produced.
I don't drink a lot of whites, but I feel like I need to mention this one as well. As I was writing this, I received a call from the owner of my store asking what I had recommended to one of my regulars that drinks almost exclusively Chardonnay. I got him hooked on Elio Grasso's Chardonnay a while back, but last time he was in, we were waiting for the new vintage, so I suggested this one.

I don't see many, if any Sicilian Chardonnay, and this one was very interesting indeed. Chardonnay is such a cool varietal. It's one of the most effected by it's surroundings, and this is a great example of that. It's rich and creamy, with hints of vanilla and butterscotch. Ripe stone fruit, and just hinting at being a bit oxidized, gives this Chardonnay a funky edge that's very unique indeed. Apparently my customer enjoyed it as well, as he was looking for more of it today. Each sip of this wine was slightly different, and I had to keep retasting it to really pick up on everything that was going on. Although this Chardonnay drinks big, it doesn't sacrifice a thing in the way of acidity or balance. I could see this wine working with pine nut encrusted salmon, even though I typically go with rosé for this type of pairing. This wine is savory, sustainably produced, and is on the shelf for about $30. This ain't no cougar juice.

Tell me about the wine you're currently dating. I'd love to hear about it. I'm not breaking up with these wines anytime soon, but I do like to play the field, at least when it comes to wine.